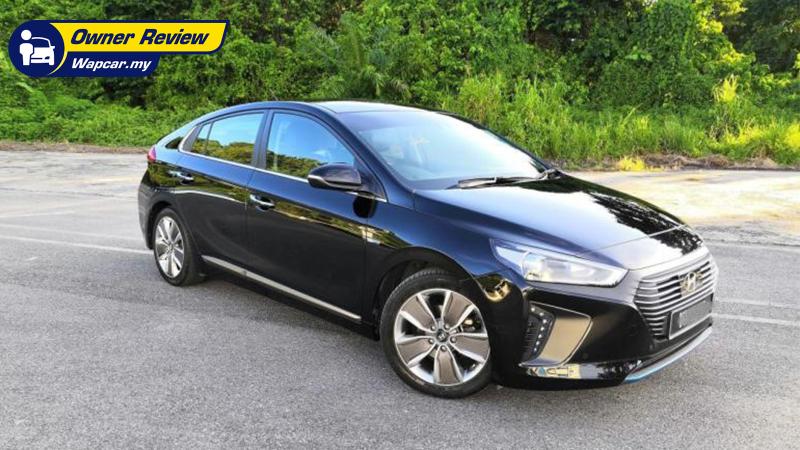 Kimchi cars do not attract much attention among car buyers in Malaysia, what more if it is a Hybrid? A big NO-NO. But this 2019 Hyundai Ioniq Hybrid HEV Plus 1.6 is what I ended up with, and have no regrets to date. Before I begin, here is a little backstory, the first car that I drove was a 2008 Myvi 1.3 SXi. A family car that was passed down to me by default when I went to college. It was a reliable and fuel-efficient workhorse that never required any repairs except for the usual wear and tear. Years passed, and it was finally time for me to get my first car.

From scratch, I had limited my options to cars that were not common on the road. Volkswagen Scirocco, Mitsubishi ASX, Kia Rio, Hyundai Veloster, & Hyundai Ioniq were my options. Just in case if you are wondering, the Toyota Prius was never on my list as I hated the design & it was more expensive. At a budget of 120k, the Scirocco and Veloster were out of the picture. The Ioniq beat Rio and ASX as it was more value for the money, and I liked how the car looked. 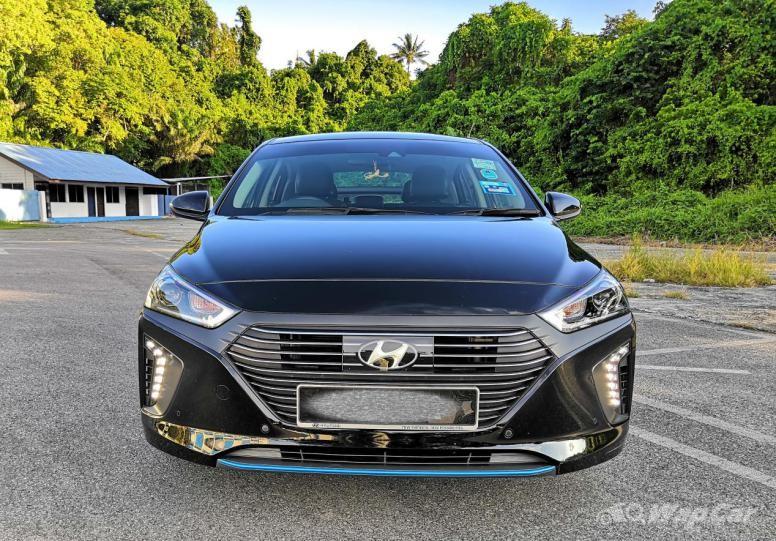 The Hyundai Ioniq has a large chrome grille with vertical DRLs & slim HID Bi-Xenon headlamps, which gives it an angry & futuristic look. The grill also houses the radar, which is part of the Hyundai Smart Sense (more on it later). 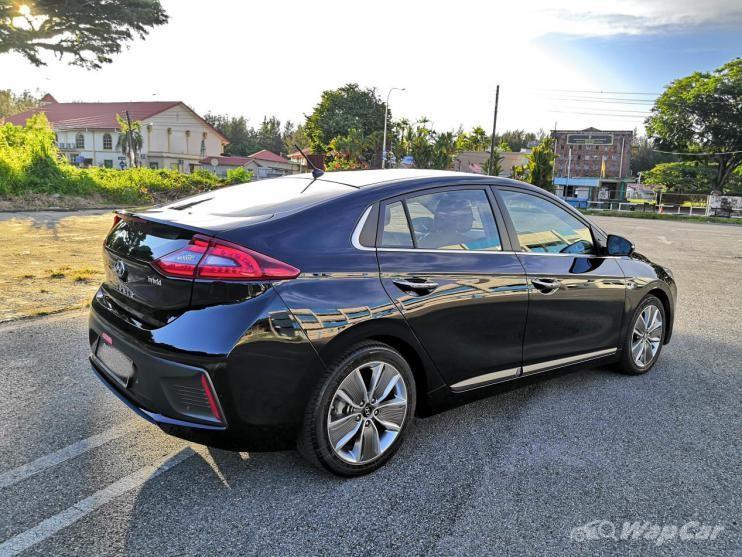 Being a fuel efficiency-oriented car, a lot of attention was paid to the design of the Hyundai Ioniq. This fastback has one of the lowest drag co-efficient in the market (even lower than the Toyota Prius), which makes the Hyundai Ioniq “glide through the air.” The downside, however, is the rear headroom. Anyone above 180cm will have his/her head brushing the roofline. 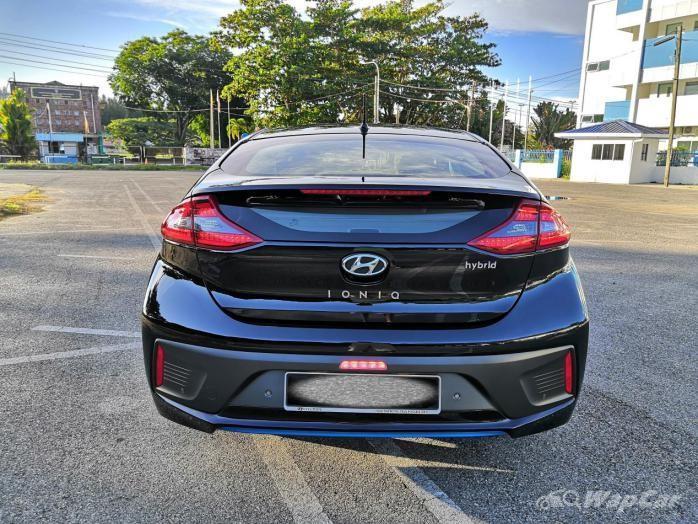 Hybrid: Efficient and fun at the same time?

The Hyundai Ioniq has a Kappa 1.6 Atkinson GDI engine producing 105 hp, 147 nm, and the 1.56 kWh lithium-ion battery-powered electric motor producing 45 hp, 170 nm. This is mated to a 6-speed DCT. In eco mode, the Hyundai Ioniq starts & accelerates solely on the electric motor. The engine only kicks in when acceleration is heavy, the battery is less than 40%, or at speed above 100 km/h during steady driving. During deceleration & downhill, the engine shuts off and the energy is captured by the brakes to recharge the electric battery. I often manage to get a respectable fuel economy of 21 km/l (4.75 L/100 km).

Fancy a fun drive? Switch to Sport mode & the instrument cluster turns orange-red while gears shift at higher RPM. Torque is instantaneous & it can do a 0 - 100 under 10 secs. The Hyundai Ioniq has McPherson Strut at the front and multi-link suspension at the back with a light steering wheel. Hence the car feels stable even at 150 - 160 km/h & take corners decently well. Body roll is present but negligible. 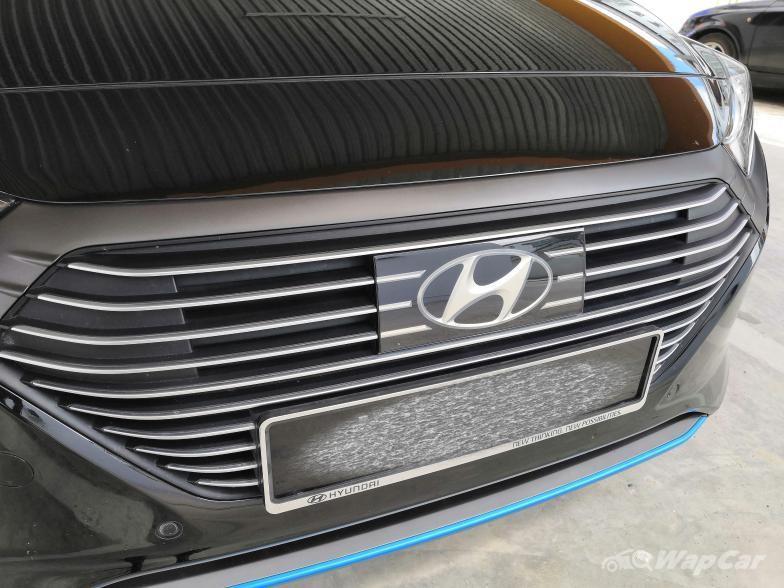 This is probably where the Hyundai Ioniq shines. Hyundai Smart Sense operates via a radar placed on the grille & cameras mounted at the front mirror. Smart Sense consists of AEB, LDW, Rear Collision Warning (RCW), Smart Cruise Control (SCC), Blind Spot Detection (BSD). Besides, this boy also has Tire Pressure Monitoring System (TPMS), Auto wipers, Auto lights, Auto closing side view mirrors, 8-way power-adjustable driver seats, auto-dimming rearview mirror, push start button to name a “few”. Hyundai Ioniq was introduced in 2016, and it was one of the earliest / cheapest cars to offer such technology in Malaysia back then. The AEB, in particular, has come in handy many times and helped me escape many potential knocks. 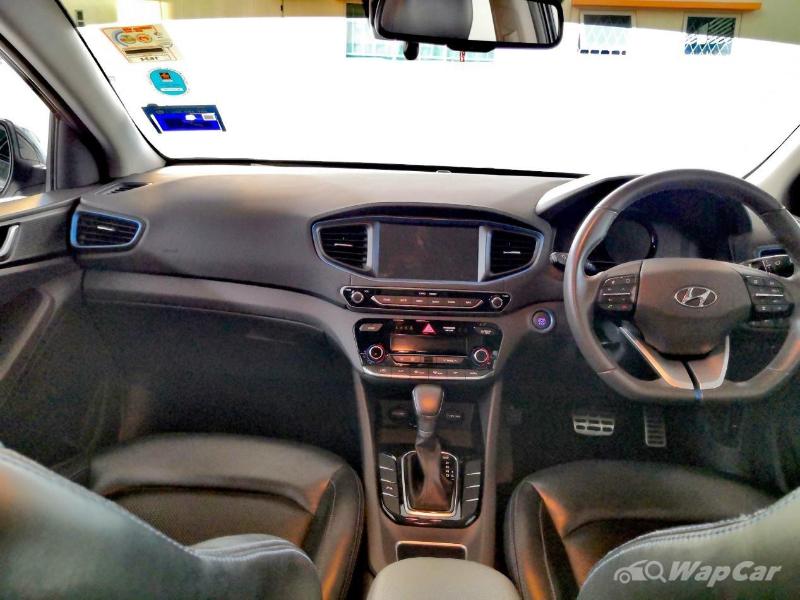 The Hyundai Ioniq has a very dull all black/grey interior, which doesn’t spark any excitement. But what it lacks in appearance, it makes up with quality. Full leather upholstery, soft-touch plastic at the common touchpoints, adjustable steering column, dual-zone climate control & a good seating position with adjustable lumbar support makes the cabin a very nice place to spend time in during long journeys and stop-go traffic. The cabin NVH levels are so low that only the tire noise is heard as the engine is off most of the time & wind noise is canceled out even at high speeds. 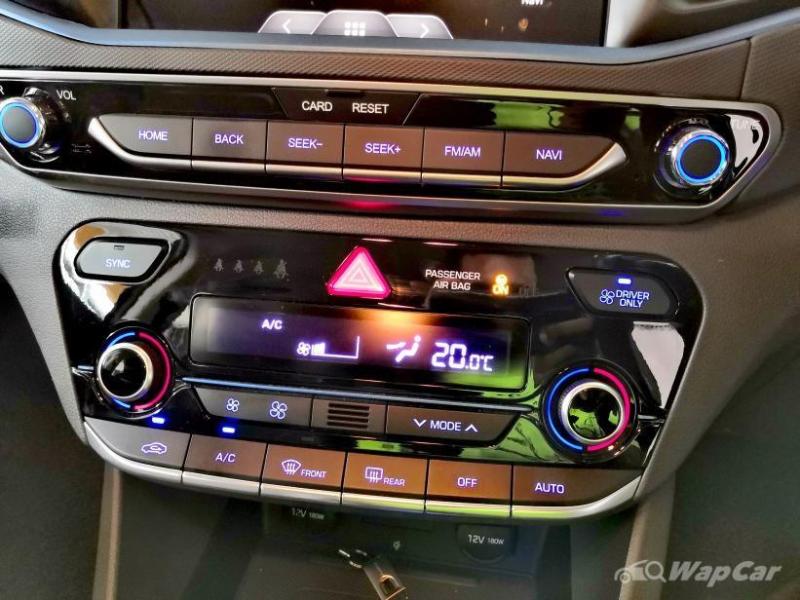 One interesting quirk in the Hyundai Ioniq is the “driver only” AC button which when on, shuts off all other AC vents in the cabin and only keeps the AC vents directed at the driver open. That is how to be “economical.” 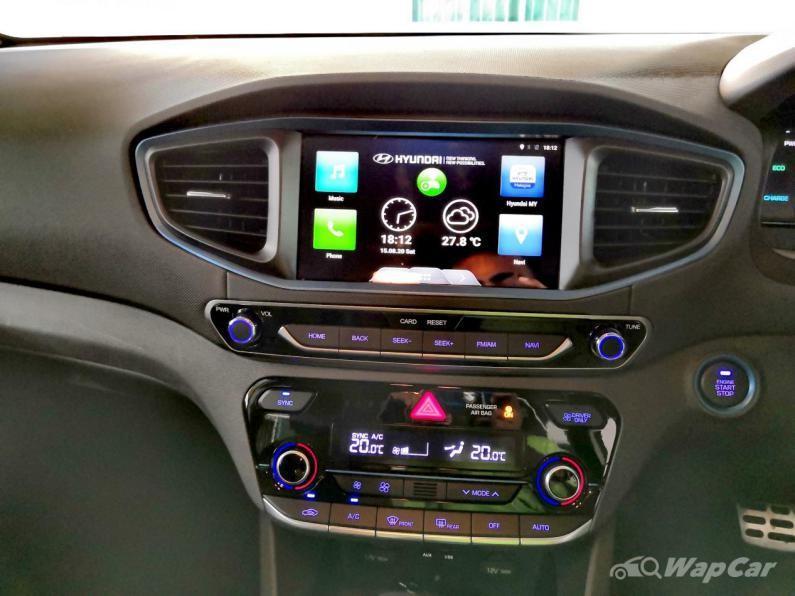 The head unit is not the original Hyundai set which comes from Korea, rather, it is an Android-based head unit installed by Sime Darby. Thus it lacks Android Auto / Apple CarPlay which every other market in the world gets. This is a constant issue that is brought up in Ioniq Forums.

Personally, I have not many complaints with the head unit as it can still connect to Spotify / Waze / Google Map and Bluetooth. It has a sim card slot if one wishes to insert a sim for data. Or you can just turn on personal hotspot on your phone and connect the head unit via wifi (which is what I do).

As Hyundai Ioniq is not a regular combustion engine vehicle, service intervals are longer than usual. Engine oil needs a longer interval to change & brake pads wear slower. It only requires service at 15,000 km / 10 months once. That's almost once a year service! What more, Hyundai Malaysia provides 3 years / 60,000km free service. The battery gets a 7 years warranty (so that is one fear taken care of…. at least for 7 years). It is probably still early to judge, but in my one and half years of ownership, I have not faced any malfunction or car failing to startup. But as some Hyundai Ioniq users have reported, if you get a lemon unit, your car has to visit the service center frequently due to head unit hang / car fails to start / constant rattling sound at the rear end of the car.

One major drawback of owning a Hyundai? The small number of service centers available in the country. It's worse if you are in East Malaysia. I had recently shifted to Miri for work & guess what? The nearest Hyundai service center is 2-3 hours away in Bintulu, as the service center in Miri was closed down due to an insufficient volume of cars to service. But since the service is only once a year, it is a compromise I am willing to make for a car this good. 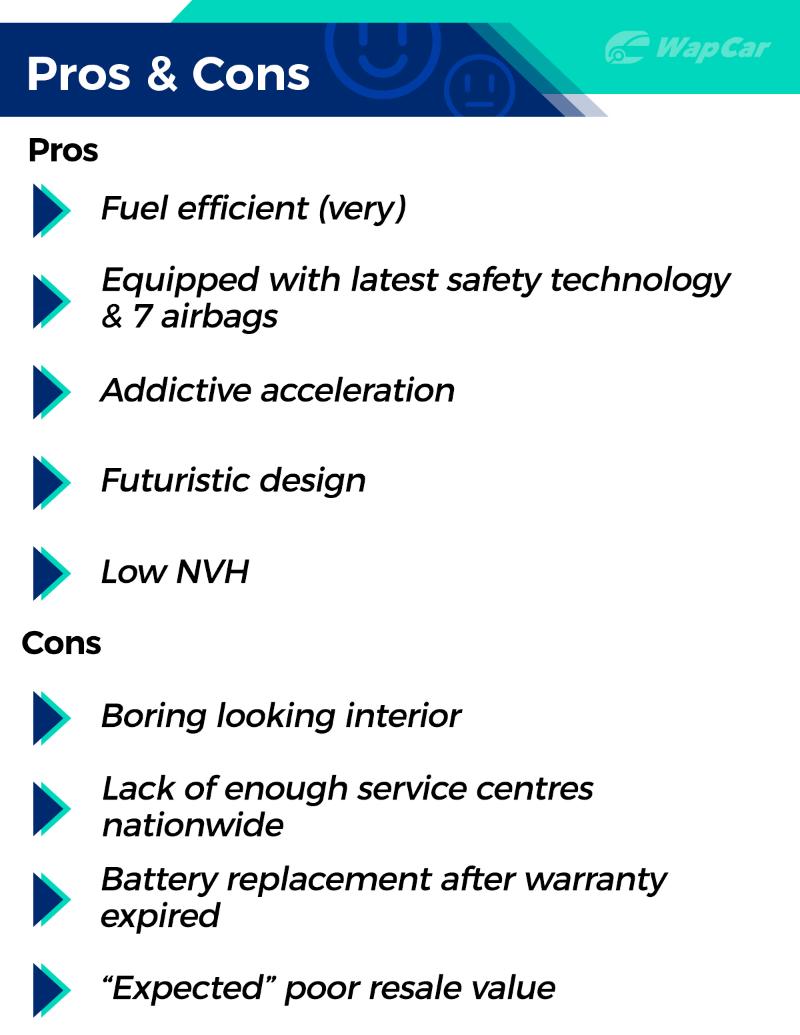