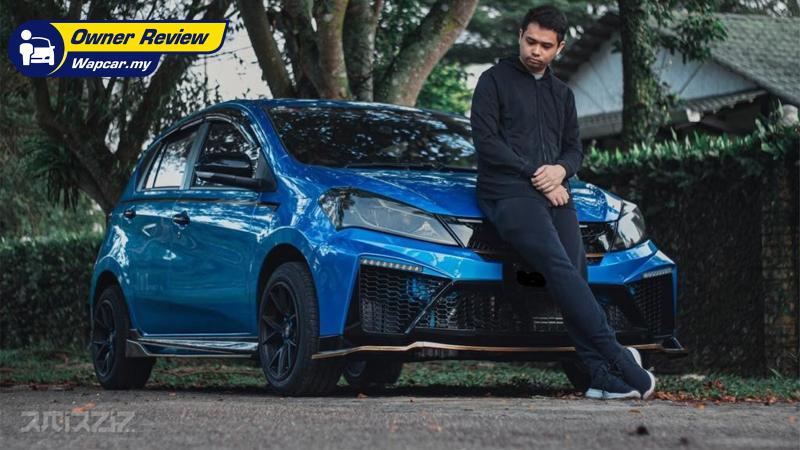 Reason why I bought this car

I bought this car due to the reason that my old pal, the 2005 Perodua Kelisa EZi had started to cause problems for me. During the past 3 years (2017-2019), the old soldier was acting like a very expensive girlfriend that need it's parts some changing like the alternator (couple of times), mountings and a lot more words that even I can't pronounce well. I had planned to get it repaired but the amount and frequency of the problem it caused was too much for me.

My father bought the car for me when I was still studying in University. As someone who had lived in Ipoh my whole life, KL/Selangor was another planet for me as I didn't know how to commute at the time other than calling for a taxi. The Kelisa was given to me by my father as a birthday present and it became my arms and leg around the University . It felt that the Kelisa was an extension of me and would take me to places I can never reach before. I was still using the same old car when I graduated and started work. But sadly, after 6 years owning it, its time the old pal and I part ways. It was an emotional day for me when I finally sold it off. 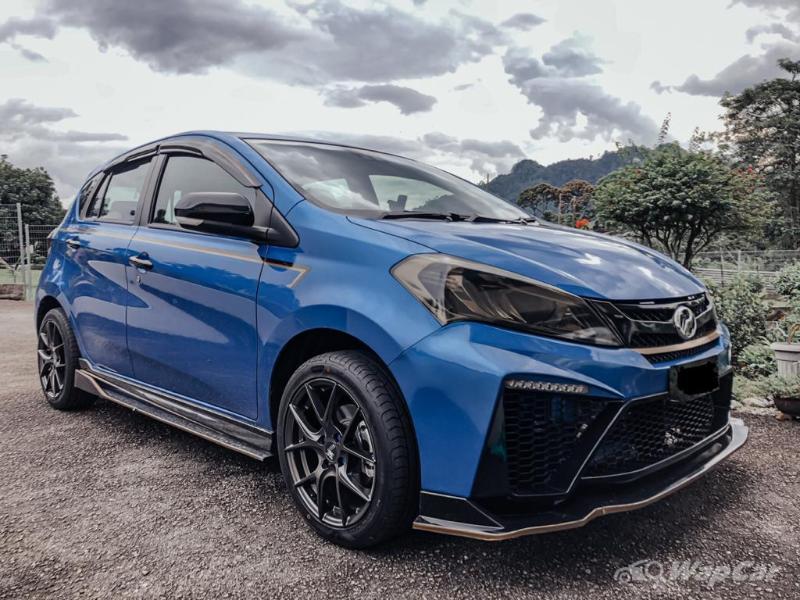 After graduating, I mainly use my car to travel from Selangor to Perak to visit my parents on alternate weekends. Other than that, I only treat it as a weekend car to meet my friends. On weekdays, the car will only be parked in an underground parking lot as I only take the LRT to work. Since the plan was to continue to use it as a weekend car, I didn't see a reason to get an expensive upgrade. But I still wanted a modern car packed with modern features and would not want to settle with second-hand car that potentially had a broken radio or one where I can't use Bluetooth. I would also appreciate some safety features like Airbags and Traction Control, something the old Kelisa doesn't have.

It was then that my close friends suggested the new Perodua Myvi that had been the best selling local car for the second year in a row. The Myvi had a similar look to the Kelisa being a hatchback and I immediately fell in love with it. Its not that I had never seen the new 2018 Myvi on the road prior to this, its just that I haven't had a closer look before as I am not a fan of cars at the time. The Myvi had everything I wanted in a car. It offered the 6 Airbags, Traction Control, Vehicle Stability Control, and the best feature that caught my eye, the Advance Safety Assist (ASA). Who would've thought that an affordable car offered a state of the art (A little bit of exaggeration here) safety system? It was news to me of what the car was capable of, coming from the boy with a 2005 Kelisa. I knew I had to get it. 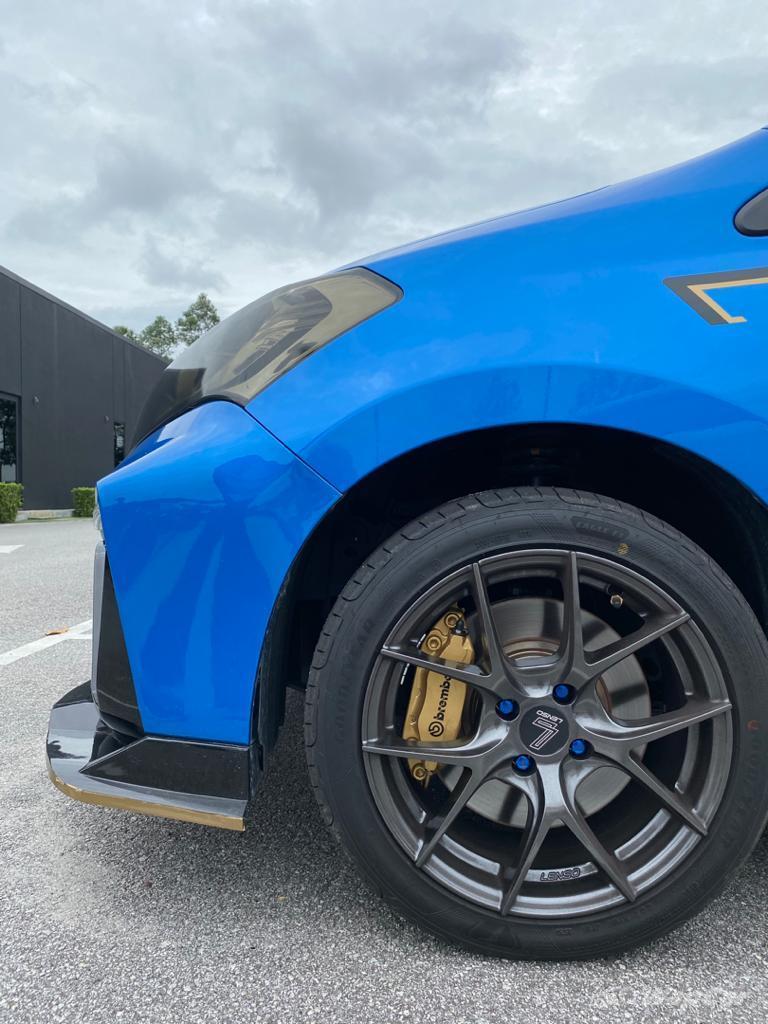 Before choosing the right car, I did a little bit of research and  had a few options in mind with the Honda Jazz being the best choice. In comparison, everything was better with the  Jazz in terms of the quality build that Honda offers. But on the outside, the Jazz design does not look attractive at all. The Myvi however had a sharper design, and lets not lie, it DOES look like it could be a JDM-ish sportscar.

The other cars I considered wasn't up to par upon having more research. The current safety features that Perodua featured in the Myvi was too good to let go in comparison with the Axia and the Proton Saga. It had a wide range of features packed in a sexy car with an affordable price, not to mention that sweet built-in Smart Tag!  At this point, it was a no-brainer to get the Myvi. 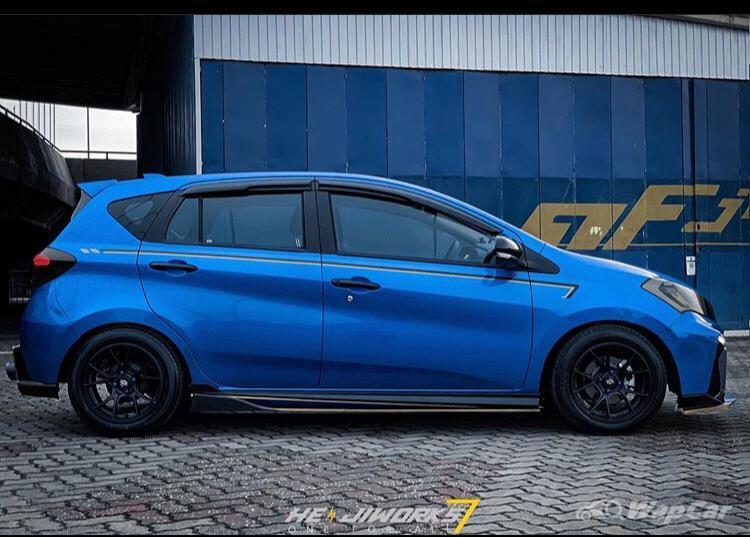 I wanted to get the granite grey color because of how cool it looks. But due to the large amount of orders that Perodua had at the time, I had to wait for a couple of months to get mine. Perodua was massively getting sales for the Myvi due to the sales tax exemption that was in affect during the MCO period.

It was like a blessing in disguise when the news came. Perodua had just launch the new 2020 Myvi with an upgrade safety feature in the form of the ASA 2.0. They also included the favourite Electric Blue color that was also in the last gen Myvi. I told my Sales Advisor to immediately change my order to the newer version of the Myvi in regards to the new safety feature. But unfortunately, the granite grey wasn't available at the time and would require me to wait more. I couldn't wait any longer so I settled in for the new blue. I did not regret my decision as it was a loud color and looked sleek. 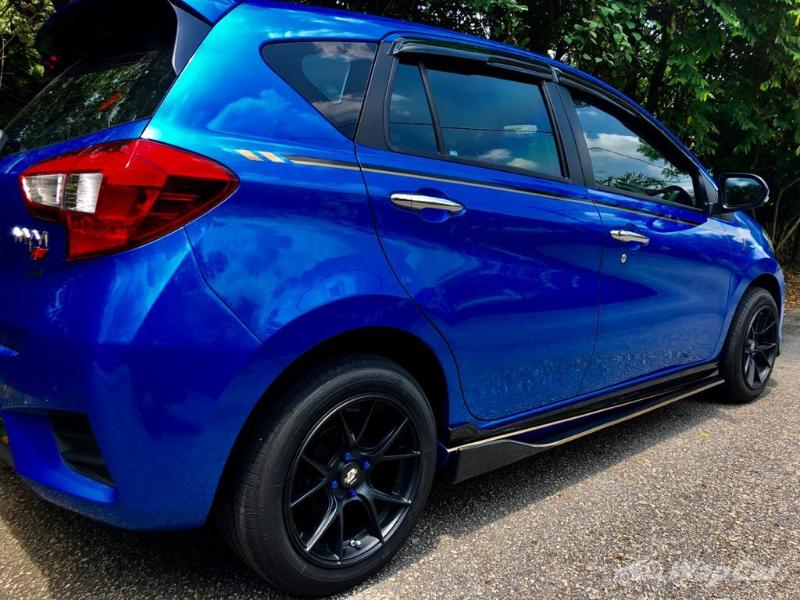 As I drove more and more, I found that there were things I like and dislike. I like how it feels to drive a better comfort car compared to my old Kelisa. To me, it felt like I just got a luxury car for a bargain. The 1.5AV variant came with a semi-bucket leather seat that was built for comfort and has a considerable amount of leg space. The leg space was an important factor as I have an unusual set of long legs and I felt that it was a major upgrade compared to the cramp leg space I had in the Kelisa.

There were some aspects to the Myvi that I dislike. The most common one among the other Myvi users were the rattling sound that came from various parts of the car. Some users reported that they had this noise in the back of the car and some in the doors. For me, the noise came from inside the dashboard. I have to switch on the radio and crank up the volume if I were to eliminate the noise or otherwise it will be quite annoying. Other than that, the stock suspension that Perodua provided were quite soft as I felt some free-play in the back of the car from time to time.

All in all, the Myvi was a good buy. But considering the price tag was so that Malaysians could afford, the quality of the build was only satisfactory at best. 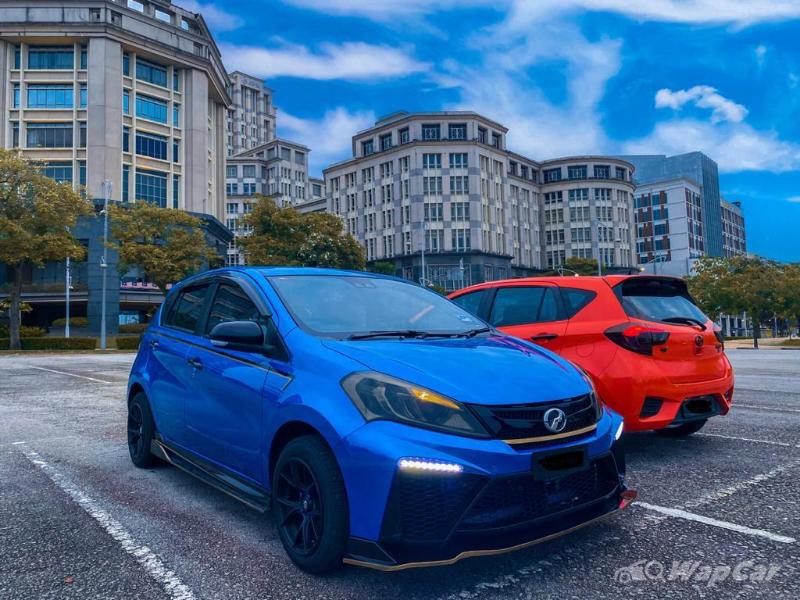 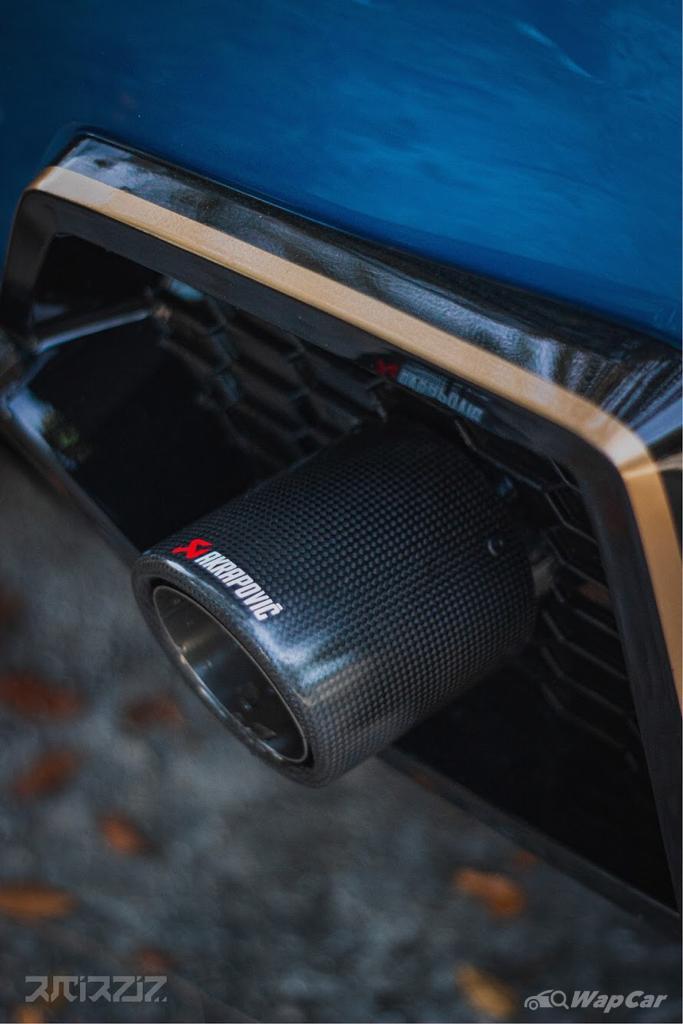 I bought the Myvi as a replacement to my Perodua Kelisa. But upon buying the car, I felt that it looked just like any other car albeit that the Electric Blue Myvi was just only released. It does not a have name, a style and a look that was special enough to call mine. I wanted this car to be different than any other Myvi on the road. I had some spare changes in my pocket at the time, so I decided to do the very thing that most people wouldn't dare to do with a new car. Modifications!

Fast-forward 6 months later with only 6000km clocked in, I had spent a total amount of around RM20,000 for modifications. Whoops (sorry mom). These mods included a new and larger set of rims and tyres, a full GT bodykit, Brembo Brake Kit, and a full set of exhaust system (IHE). The little bits and pieces left are things like the UR Safety Bar and a partial Wrap; mixing some gold color to compliment the blue.

I won't disclose the full details of the mods as some of it are still in trial and error stage and might upset some car enthusiast in regards to what I am doing. 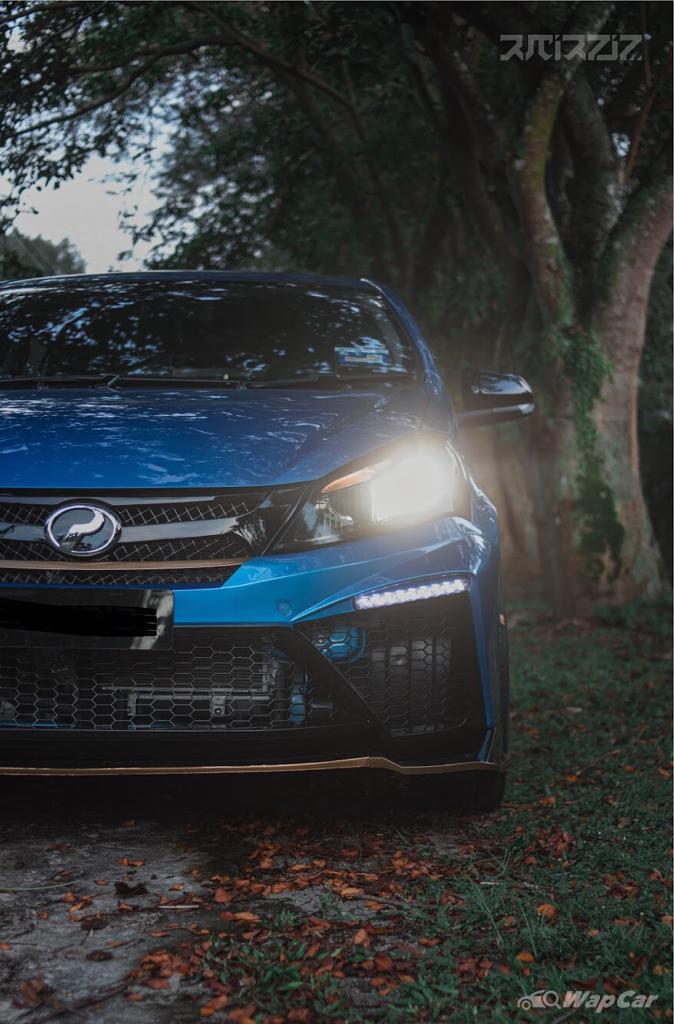 Well, there are not a lot of interesting events that happened in the past 6 months. I'm proud to say that my learning curve went from zero to hundred in a matter of months. I had friends that helped me along the way by feeding me information about cars and how to modify. I read a lot and experimented with the car as much as I can afford.

During the first two months alone, my car had spin and skidded on the highway. Part of it was due through hydroplaning and the other part was due to the modification I had done without extensive reading. It was my mistake that I misunderstood what I got myself into. I had to learn the hard way that playing with cars is not child's play and any errors I have done might cost me my life, or worse, the lives of other people. Luckily no one got hurt and my car escaped without a scratch. I don't count that as "interesting", but its certainly an event that was etched in my brain.

I would advise anyone who wants to try and modify your car to do an extensive research and get feedbacks before diving into the real thing. A bit of knowledge might save a life. 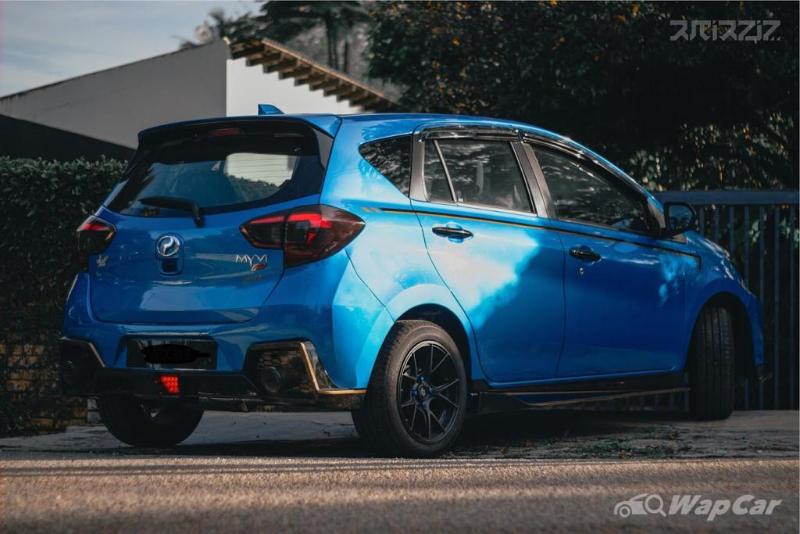