** This Article is published on WapCar Community. Click the link below to enter the community for car enthusiasts in Malaysia
https://forum.wapcar.my 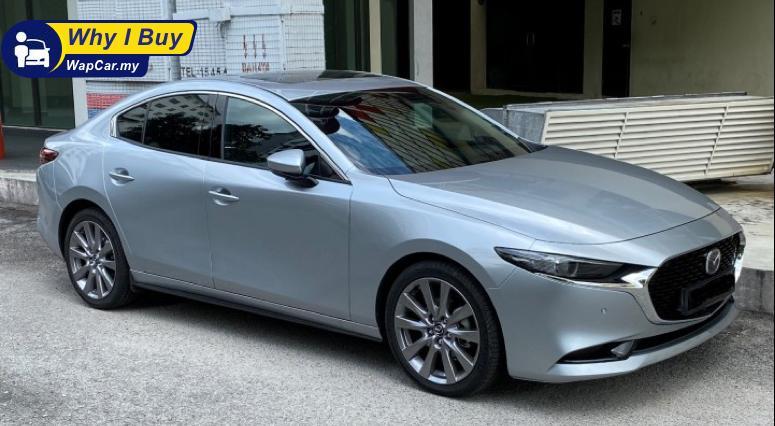 Let’s face it. 2020 hasn’t exactly been the best year for everybody what with the Covic 19 pandemic and the economic downturn. But for us car enthusiasts, we had a small reason to rejoice. The government’s announcement on car tax exemptions meant that cars that were otherwise out of budget for most folks were now just a little bit more attainable. I am one of those folks.

I’ve been driving a Honda City since 2009 when the new model first came out. While I loved that car to bits, signs of aging were beginning to show. From 2019 onwards, I found myself having to go to the workshop more and more often. It came to a point where I’d fix one thing, drive out of the workshop only to have something else fail almost immediately.

Naturally, I figured it was time to upgrade. That, coupled with the current tax exemptions made my decision so much easier to make. It was initially down to 2 choices at first. Believe it or not, the Mazda 3 wasn’t even in my list at first. It was either the Civic or Altis. Having gone for test drives and done extensive research on these 2 models, I was about to pull the trigger on the Civic.

But somewhere along the way, I found out about the all new 2019 Mazda 3 that was launched late last year. It ticked every checkbox in my list (save for the price). So I figured, why not go for a test drive? I had nothing to lose. And the minute I stepped into the car, I knew I had to get this. It’s one of those heart-over-head moments. Your head tells you it’s probably more economical to go for the Civic, but deep down in your heart, you know you want this pricier option.

And you might ask me, what is it about the Mazda 3 that triggered this response? I’ll go into that in more detail in later sections.

I have to mention here that I had to wait more than 2 months for the car to arrive from Japan. The wait was extremely agonizing. But you know what they say … good things come to those who wait.

You know that feeling when you step into a car and you can almost feel the amount of hard work, love and soul that was poured into designing it? Well, the Mazda 3 exudes all this in every way possible. Every aspect of the car screams luxury and refinement. Every single detail that went into the car was thought out extensively. If a button is placed in a certain way at a certain angle, there’s a reason behind it.

Luxurious interior. The leather seats are plush and super comfortable. And this extends to even the dashboard and doors. Every thing feels soft to the touch. Even the buttons feel extra cushy and premium. The infotainment system has zero lag (as opposed to many other touch screen systems on other cars nowadays) and the screen is crisp and clear. Even the instrument cluster’s refresh rate is high, in fact it’s so snappy that you’d be forgiven for mistaking it for an analogue dial.

Safety first. On top of the standard 7 SRS airbags, the Mazda 3 comes with Mazda’s own suite of safety features called I-Activesense. One of the better things about this system is that the alarm system is non-intrusive. It gives off a gentle chime which is stern enough to give you ample warning, yet soothing enough to not annoy you. Also, the Heads-Up Display is something I now long for when driving other cars.

Quietest in its class. And it truly is. Insulation is top notch. Traffic noise is very much subdued. Wind noise isn’t so apparent until you hit 100km and above. And the road noise is kept to a minimum, though driving on unavoidably rough roads like the Federal Highway (we’re in Malaysia after all) will still yield a bit of tyre noise.

Here’s where I made my first modification (if it can be called that). I traded the stock Bridgestone Turanza T005s for Michelin Primacy 4 tyres. And this supercharged the car to an unbelievably comfortable and quiet, yet still planted beast. I never knew comfort and planted could go in the same sentence until now.

Crank that sound system up. Being an audiophile and a part time musician, I am particularly sensitive to audio quality in any sound system. Guess what? The sound system in this Mazda 3 is one of the best I’ve ever listened to. That is provided you know how to tweak the frequencies to your listening preferences. It takes some time but once you hit that sweet spot, you’ll be in musical heaven. And this isn’t even the 12 speaker Bose system that other countries get. If that option were available in Malaysia, I’d probably never leave my car.

Reasonably good back space. Right here and now, I’d like to debunk a stigma that’s been attached to the Mazda 3 since like forever. While the older models were slightly cramped in the back seats, the latest model is no longer like that.

In fact, it’s more than enough for a family of 4. I have 2 young daughters (who will sit at the back most of the time) and I doubt if they’ll grow to be taller than me at 175cm so this fulfils all my needs as a family car.

In my personal opinion, this shouldn’t be a deal breaker as most people make it out to be. The only reason why you’d feel it’s cramped is if you compare it to the likes of the Civic or Altis. I have a friend who chose the Civic over the Mazda 3 just because he wanted extra space at the back. And he’s single. When asked how often he’d bring his parents for trips? ‘Once a year. But it’d be good have the extra space when I need it’.

To me, this seems like a really silly way to decide on something. Choosing something not because the product is good an adequate, but so you don’t miss out on what the competition is offering. Just because of that, he’s missing out on a better car.

Most people who are familiar with Mazdas will know that they tune their car’s suspension to be stiffer than others. This holds true for the Mazda 3. It’s a double-edged sword here.

The ride feels planted and a real joy to drive. But as a result, it might be a bit too bumpy and uncomfortable for some. Having the thin profile 18 inch rims doesn’t help either. But as mentioned earlier, I solved this by switching to Michelin Primacy 4 tyres. This gave me the best of both worlds. The ride is much more comfortable now but still feels great behind the wheel.

And of course, the one thing that’s always going to deter potential buyers. That price. Like others, I too was put off by the price at first. But once I changed my mindset, it made much more sense to invest in this car. For the extra money, you get a fully imported CBU car from Japan that is almost on par with most luxury cars out there today with just so many more features.

And once you own one, you’ll be wearing a big smile on your face every time you get into the car. I know I do. Every. Single. Time.