Why I Buy? Love at second sight- My story of my Mazda CX-5 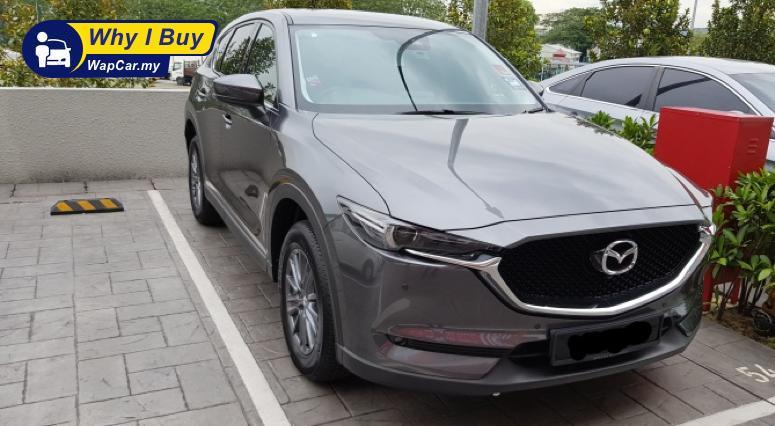 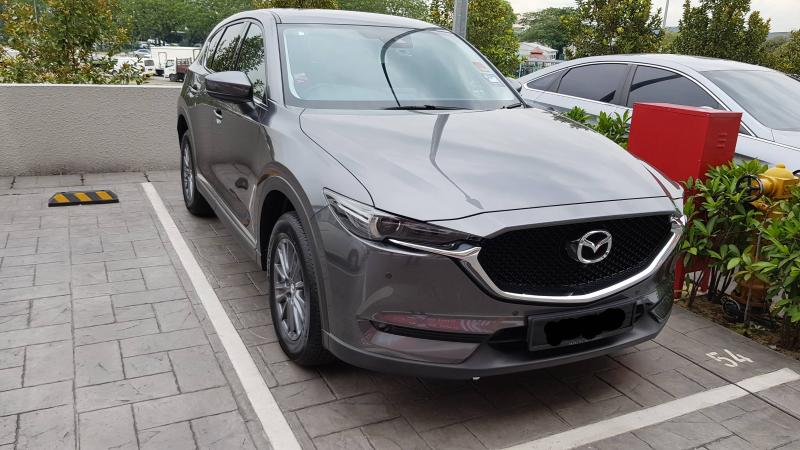 The exterior aspect of the vehicle that I will be driving everyday is one of my top priorities as I would want one that I would take a second look after parking it. Since my market is restricted to SUVs this time around after driving C-segment sedan for 6 years, the most handsome C-segment (not willing to downgrade to B-segment) SUV in the market within my budget are only CRV and CX5. 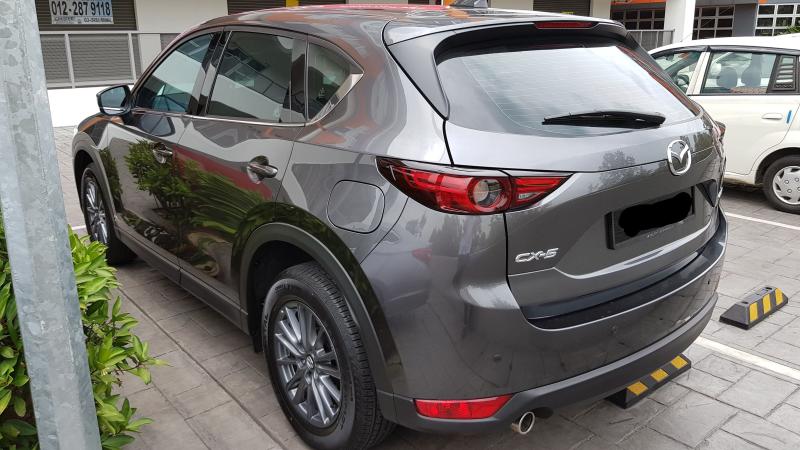 Actually, the CRV was the first to capture my attention due to the tough-looking exterior design with wide body stance from the back (which is especially handsome in dark colour).

CX5 was at first odd-shaped – similar to a shoe – due to its long bonnet and short boot space. However, after months of observing the CRVs and CX5s on the road, the CRV is more prone to being out fashioned in design, especially the front profile. The CX5 on the other hand is way ahead in design generation than most of its peers and it has grown on me to be rather handsome and beautiful SUV. Just look at that shine effect from the premium Metal Grey paint finish! 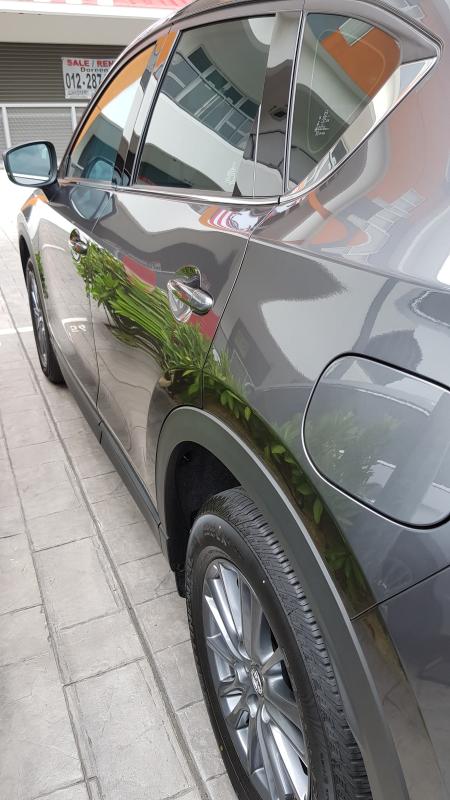 I choose the 2.0 petrol variant simply because I plan on using it for the long term and I would want it to be super reliable without requiring me to skip duty to visit workshop. My sedan last time has never broken down over its actual age of more than 8 years despite high mileage and I expect this CX5 will do so too.

The 17” rim and high-profile tyre for my variant is not a deterrent as I would like meaty tyres for my SUV. The rim design for 17” trim is rather boring but better than CRV’s 17” rim. The stock Conti CrossContact LX Sport tyres are comfortable albeit with some road noise and prone to pebbles getting stuck it its grooves. 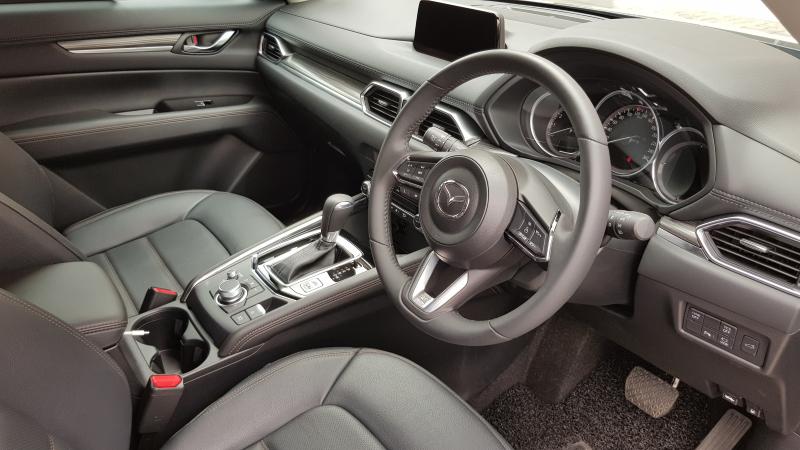 The interior build quality and NVH of the CX5 is at least one level above CRV. Mind you, the demo CRVs that I tested have loose gearbox knob, wobbly rear-view mirror and scratchy hard plastics everywhere.

In contrast, CX5 uses soft touch material in almost every touchpoint except some parts of the centre console and door storage compartment. The glove box is lined with felt-like material and cup holders are covered with rubber-like material to reduce rattling noise. The driver and front passenger window glass is double-glazed to reduced wind noise. 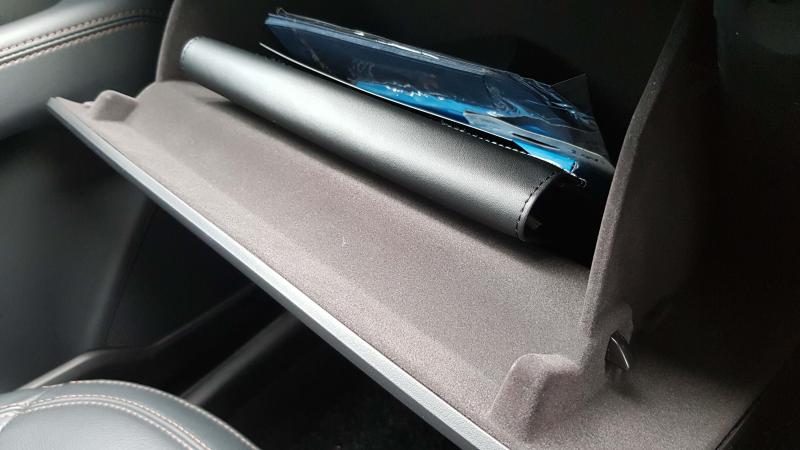 The seat sculpture is great for a slim person like me and mostly comfortable for long journey. There are electronic control buttons for seat adjustments for the front seats with lumbar support for driver seat, although not much adjustment could be made for lumbar support.
There are a few drawbacks through in the interior of the CX5. The padding design for the driver’s left knee on the centre console will leave bruises if I wear a shorts and drive for an extended period of time. The sculpture of the padding is probably limiting blood flow to certain parts of my leg and knees, leaving bruises or some numbness.

Another drawback is the saggy roof lining fabric on the centre of the car where the lighting device is mounted. You can press the roof lining up and down (instead of it being solidly plastered on the roof chassis/plate. 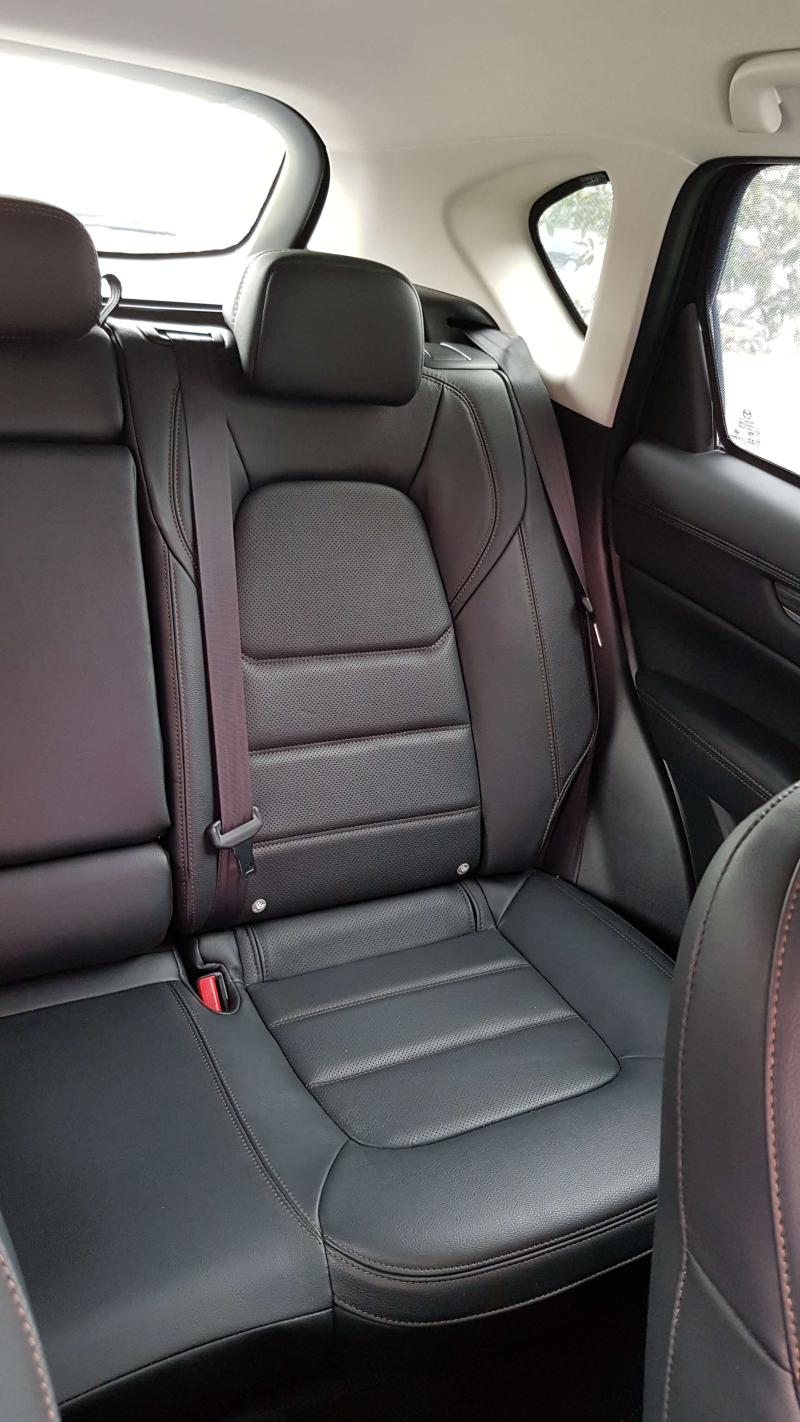 Space is an issue eventually for CX5 user as the legroom for both front and back passenger will be small for families with kids moving around. If you have mid to high Body Mass Index, I would not suggest buying one. The boot space is subjective depending on the dimension of the objects you are carrying.

For me, it is larger than my sedan in both length and height, so I have no qualm with it being labelled as one of the smallest boot space in its class. 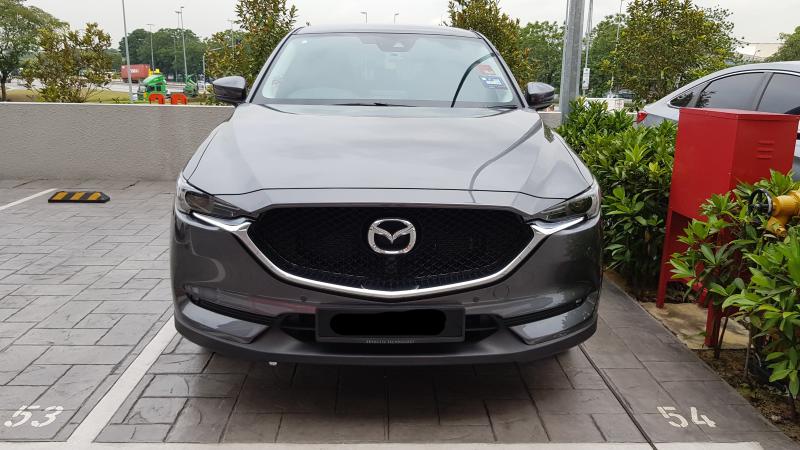 The pros of this car are in its handling. It is almost sedan-like despite the tall riding position and rather thin tyre (I reckon 235 is the minimum for an SUV tyre width for grip and look).

I have tried cornering at 80 km/h to 110 km/h and it can handle better and sharper than my sedan (with medium-soft suspension setting). The seats retain everyone in position well during aggressive manoeuvring as long as everyone in the car are strapped with their seatbelt. The suspension is not as floaty as CRV over speed bumps but nonetheless it can take most undulations with more comfort than a sedan. 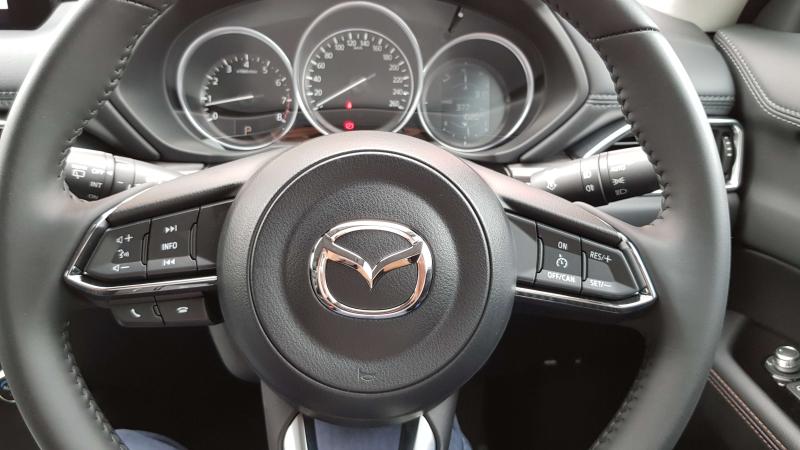 Engine performance is better than I expected for a 2 litre. It has ample power in most conditions except in high speed takeover over highways (above the national speed limit) and could overtake most cars in Genting uphill trips easily. The engine needs to be at least 80 degree Celsius for to finish warming up and 100 degree Celsius for you to feel it performing at optimum level.

Fuel consumption is not really my concern with the current cheap petrol price and the CX5 managing to fetch 10km/l to 14km/l depending on how hard I press the throttle. For the record, I use exclusively Petronas Ron95. 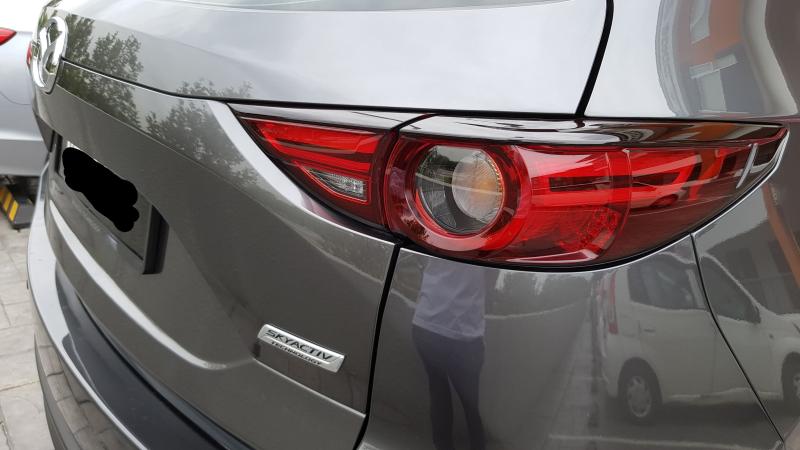 The LED headlight and taillight are one of my favourite features. CX5 by far has the brightest headlight unit in any vehicle and comparable to pre-facelift HRV with dual square LED projector headlights. Even the DRL is noticeable from far distances, further asserting its presence on the road. 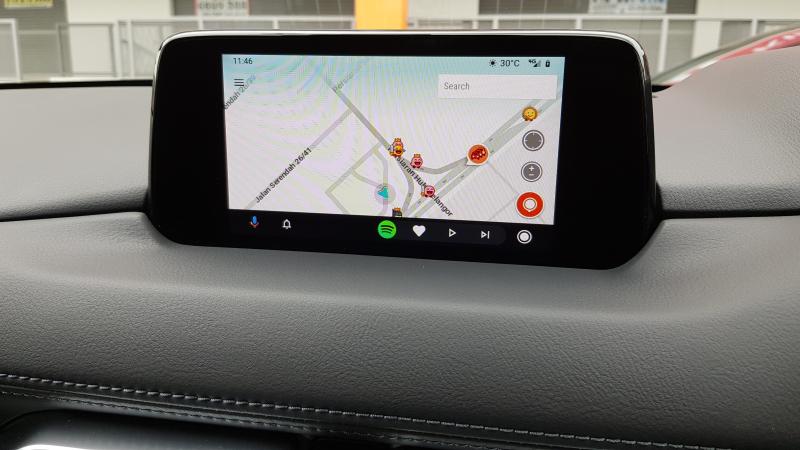 In terms of creature comforts, the in-car entertainment offering is miles an upgrade from my bluetooth-only sedan. The Android Auto functionality is a major bonus where it can navigate using waze and listen to the radio at the same time (and saved me once from hidden speed trap). The rotating knob to control the screen is very well built and intuitive to use and serve as my favourite thing to touch and play while driving. 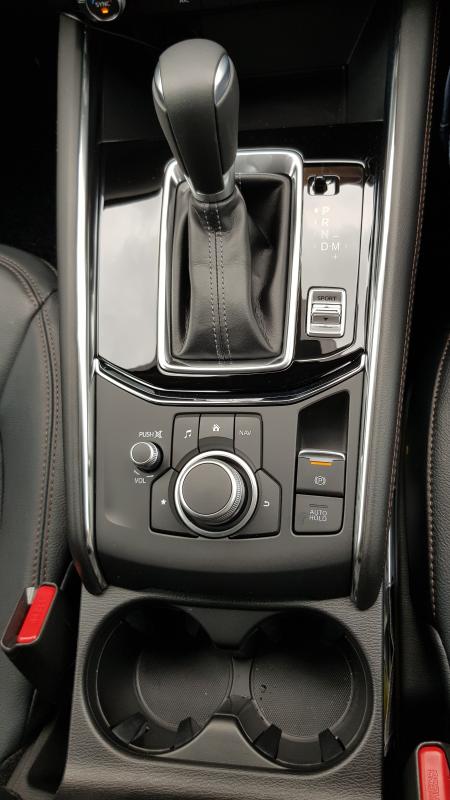 1. The cons of this SUV are largely in its space offering despite its large dimension.

2. The transmission is also a miss-or-match performer.

Often, I noticed that at slow speed crawling in traffic jam or in parking lot where you need to drive less than 20km/h, the auto transmission emits jerking sensation and would not progress seamlessly from the 1st gear to the 2nd or 3rd gear. This issue is more prevalent during cold start and in the first 5 to 10 minutes of driving from cold start. The only way to avoid this issue is to press the throttle heavier than usual to give more boost to the gearbox to change gear or to wait until the engine warmed up. 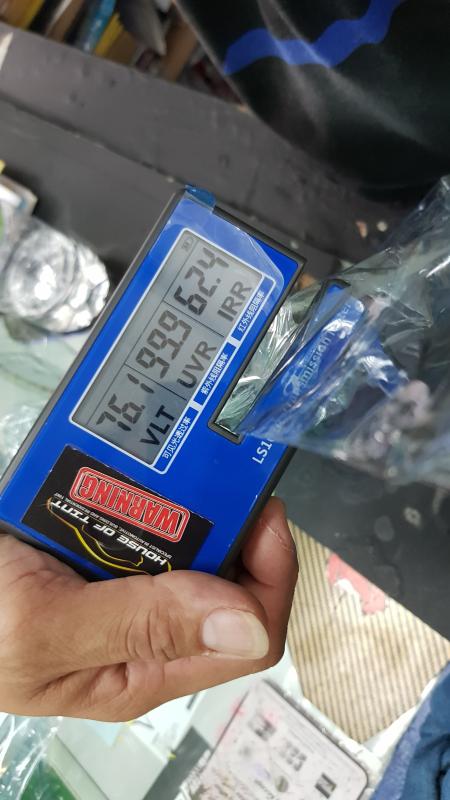 3. The pure garbage window tint package is mandatory to be included in the overall purchase price.

The biggest let-down of purchasing the CX5 is the pure garbage window tint package that is mandatory to be included in the overall purchase price. It was of the brand SkyTint by Konica Minolta and the front windscreen has the rating of only around 60% IRR and 75% VLT. I know the VLT rating is within the limit set by the JPJ but it was an aquarium glass-like rating for the front screen with an IRR rate useful if you are baking cookies on your dashboard. The rest of the windows are better with above 85% IRR and 60% VLT with security grade thickness. After weeks of trying the stock tint, I decided to change the front wind screen tint to 95% IRR & 50% VLT with the rest of the windows double tinted to 95% IRR and 40% to 2% VLT. No more to being blinded by the morning sun and high beam from the rear and opposing lane.

Overall, the CX5 ticks the most of my must-have boxes (mostly in looks and handling department) in an SUV compared to its peers within my budget constraint. It offers the best feeling of upgrade from my sedan, with its greater build quality and creature comforts and yet still offer better ride and handling all in one package. The downsides of this SUV are inherent to Mazda’s design philosophy with limited interior space, but I can still live with these for the time being. 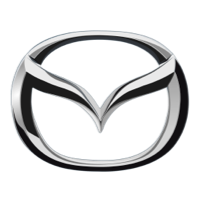