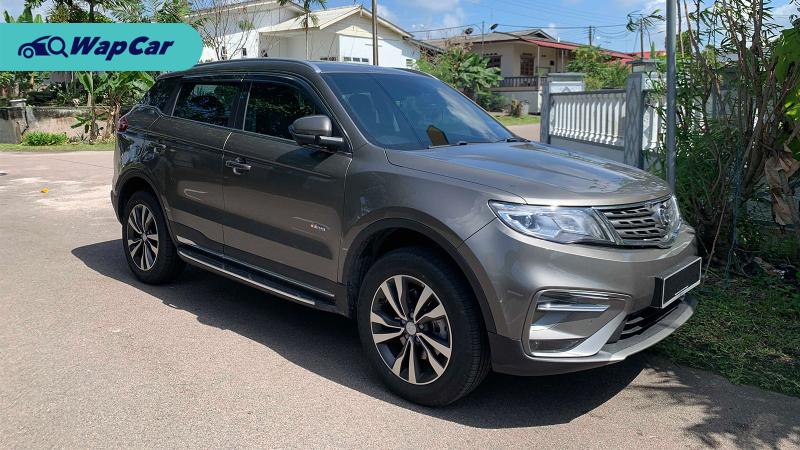 I had been waiting for the launching of the Proton X70 CKD for the longest time, when it finally came on 12th February, and booking for the Standard model was made the very next day after a test drive. I had also tested Mazda CX-5, Honda CR-V, Nissan X-Trail and not forgetting the CBU model. The shortlist was either a brand new CKD Proton X70 or a second hand Honda CRV. I’m sure the readers are not interested in why I made such decision, but ultimately it would be a C-segment car at under 100K to replace my ageing Nissan Sylphy.

There was the heartbreak when COVID-19 stroke. Proton would not guarantee delivery any earlier than June 2020 due to “shortage of parts from mainland China”. The heartbreak turned into joy when the government announced that starting 15th June we would enjoy the SST tax holiday. There was no sign of the Standard model though, and I prepared myself for the worst. Then fortune stroke when the dealership made a deal to provide me with an Executive model within three days if I agreed to take a substantial cash rebate instead of the Early Bird package. That meant it would meet my budget of below 100K. The car was registered on 30th June and I finally took delivery of a Jet Grey Proton X70 on 5th July 2020.

Comfort as Priority, Power as Bonus 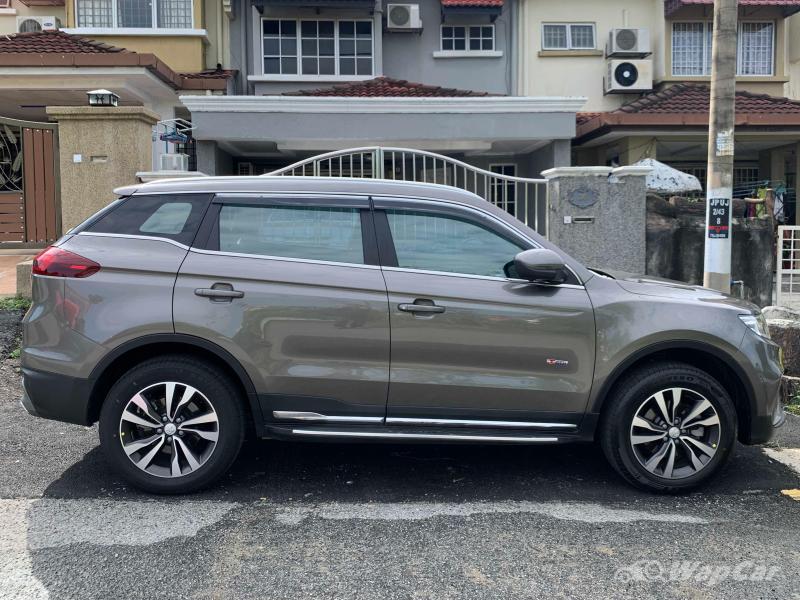 Unfortunately, the busyness of my work reduced the euphoria of getting a new car to short work trips. Until the last weekend that is, the promised family short break to finally drive back to my wife’s hometown in Kluang, Johor after 5 months. The MCO period had given ample opportunities to shop online for accessories that includes dealing for good quality tint; comfort for my family of five is high on the priority. The excellent NVH and refinement of CBU units had made short work of my decision-making process.

Even my 21-year old, Generation-Z son was impressed with the power and smoothness of the Proton X70. Yes, the Sylphy was such a bore that it became a chore whenever I called upon him for pilot duties to let me take some forty winks of rest. Quietly, he narrated his joy to his grandmother. That itself was an achievement because kids his generation were more interested in whipping out gadgets during any trip, rather than automotive enjoyment; a car is just a tool to get from point A to point B (and the Sylphy provides just that).

Ride and Handling of the Proton X70 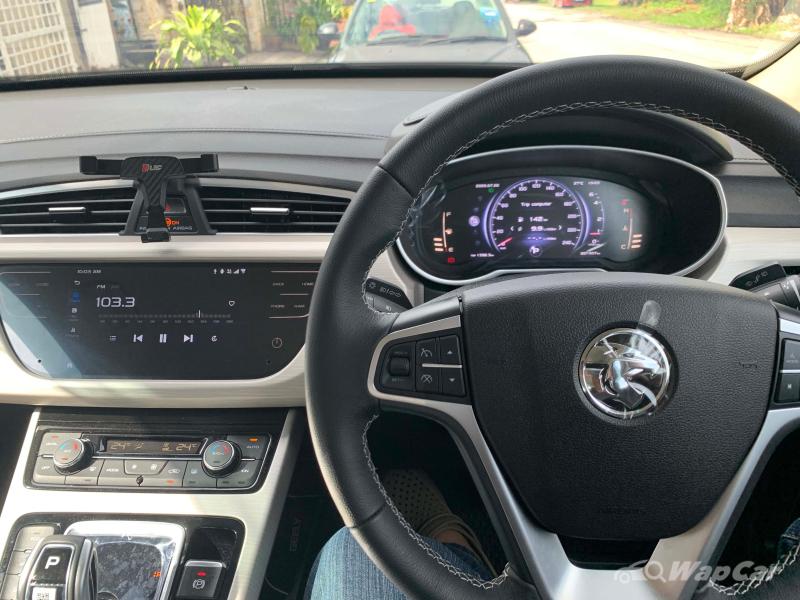 When I tested the Proton X70, both CBU and CKD models, the ride is above par when compared with CRV and CX-5. However, an SUV is still an SUV, a tall-riding hatchback/wagon with tad bit more space liberated by a higher platform. I did not of course afford longer test drives unlike those car journalists could. So, I was rather hoping that Proton's signature ride and handling would be injected to the CKD model. I was a bit let down by the end result, but not totally disappointed. The car steering handled too light to my liking, but I discovered a “sport” mode in the steering setting. It is now heavier and more stable, but nothing like any C-segment cars, let alone a Waja as my benchmark. Body roll is still pronounced and the culprit is the ride height.

In my opinion, lowering the ride height maybe by 30-50mm would not sacrifice the ride quality by too much. I am hoping for a factory solution rather than an aftermarket route. I might also install wheel spacers that will increase the car’s track. There are two benefits which are better handling and more muscular looks, apart from the obvious downside of possible warranty being void for the suspension setup. Easily avoidable though, by removing the spacers prior to sending for service at service centres.

At this time of writing, the Proton X70 had just completed its first 1K service. So far, for me at least, the fuel consumption is surprising, considering the fact that I had been preparing myself for worse after reading up some people’s remarks of the CBU X70’s high fuel consumption. The trade-off is more than made up by the smooth DCT gearbox and torquey powerplant at 300Nm. I had ownership experience of different transmission types, namely Mazda 323’s torque converter, VW’s wet-clutch DSG, and Sylphy’s CVT.

I understand that the DCT in the Proton X70 is setup more for fuel efficiency rather than outright performance. I noticed during short test drives that the gearbox quickly and smoothly settled at D5, unlike VW’s DSG which will happily swap lower ratios should I floor the accelerator. Well, that small 1.4-litre engine would run out of puff earlier anyway. I could launch earlier with Sylphy’s CVT if I ever need the traffic light sprints. On Normal mode, the Proton X70's transmission needs to do some work to overcome the weight at D1, and in my opinion, the only time that it drinks rather than sips fuel. It is less than happy in a stop and go traffic. At speed, when other cars are tuned to maximize fuel efficiency at 90km/h, X70 can easily does it at 100km/h still. Speeds of 110km/h to 130km/h would return similar fuel consumption (on a level terrain), that the answer is up to you whether it will be worth a speeding ticket during highway runs. 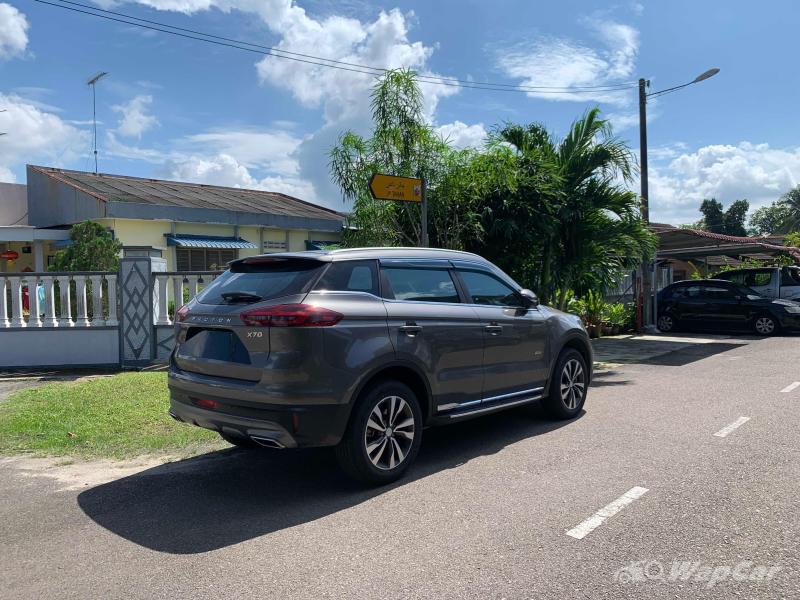 This is only the start of my story with the Proton X70 and my rather subjective opinions of the experience so far. I have not even been able to explore more of what the car can do other than driving it as I would any other car. It has proven it’s worth as the C-segment car under RM100K, in my own opinion. How it stands up with other SUVs however, is another matter altogether and not in my objectives. That it can hold its own forte with its excellent NVH and ride quality packaged with more than sufficient power and torque at the moment; surpassed its downside of mediocre fuel consumption and interior space compared with the likes of Honda CRV.