Owner Review: 9 years and going strong with my Proton Exora - I'm not interested in getting a new car

** This Article is published on WapCar Community. Click the link below to enter the community for car enthusiasts in Malaysia
https://forum.wapcar.my 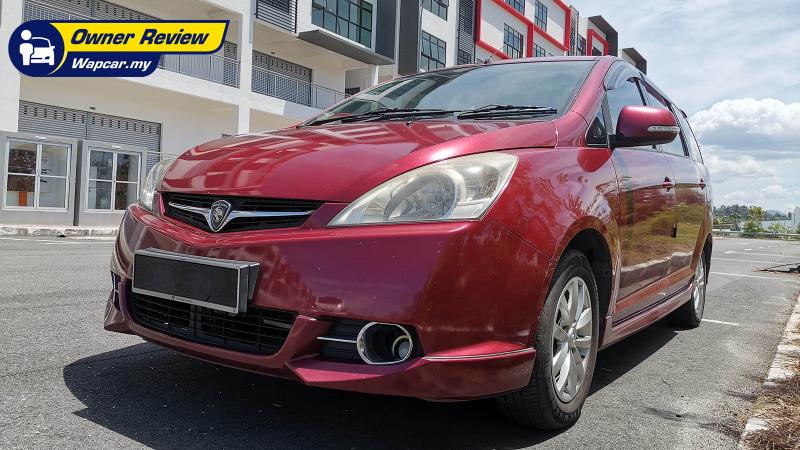 Looking back during my childhood, my dad went through 4 different vans and 1 Unser to carry my 5 siblings around. They were big, noisy, carry all vehicle. We did travel far in vans, but they are very basic people carrier.

One of his friends however had a Toyota Estima. Boy, that van blew me away. It was huge, had a sunroof, had a TV and mobile phone and all this was in the early 90s! And it was fast! Faster than a typical van at least. 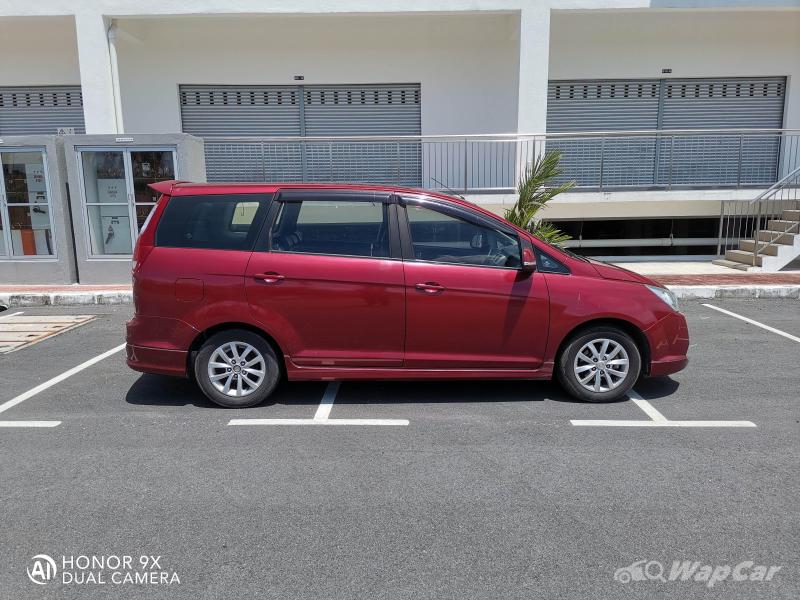 After my faithful 8-year-old Saga LMSS (silver) was stolen, I was desperate to look for another car, quick. My wife was pregnant with our first child and we were travelling around on a motorbike. I told my wife that I wanted to drive a large automatic vehicle. Our budget was anything below 100k as we were on the fast track to settle the house loan. She agreed, so we quickly shortlisted some 'affordable' cars.

In spite of being bigger than life, the car was surprisingly easy to drive and park. The 4-speed gearbox was amazingly responsive (more on this later) and it was much faster than my old Iswara, even in corners. Short story long, some 3 days later, my loan was approved and I drove home a brand new red Exora, ready for the baby. 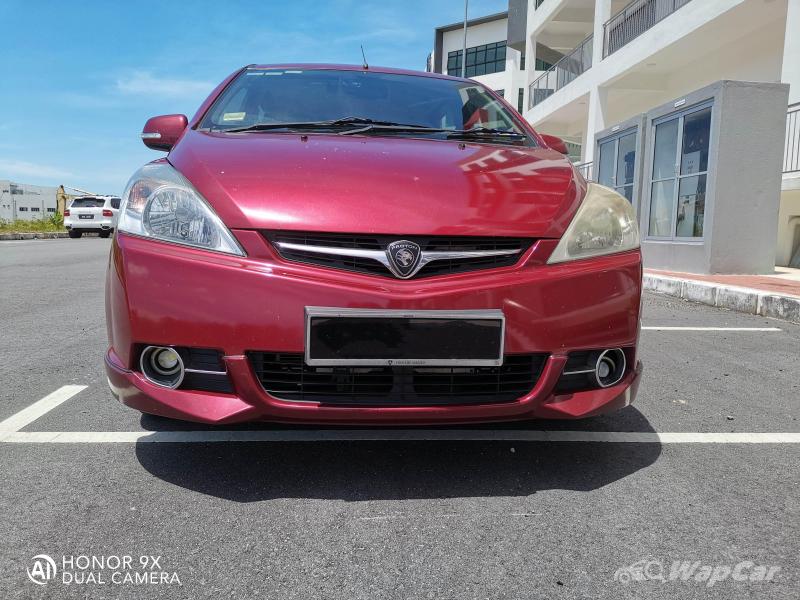 The car (or the van) that I purchased was the top of the line, Exora MC2 H-Line. This will be the second iteration of the model, coupled with the good old Campro CPS and a 4 speed AT. 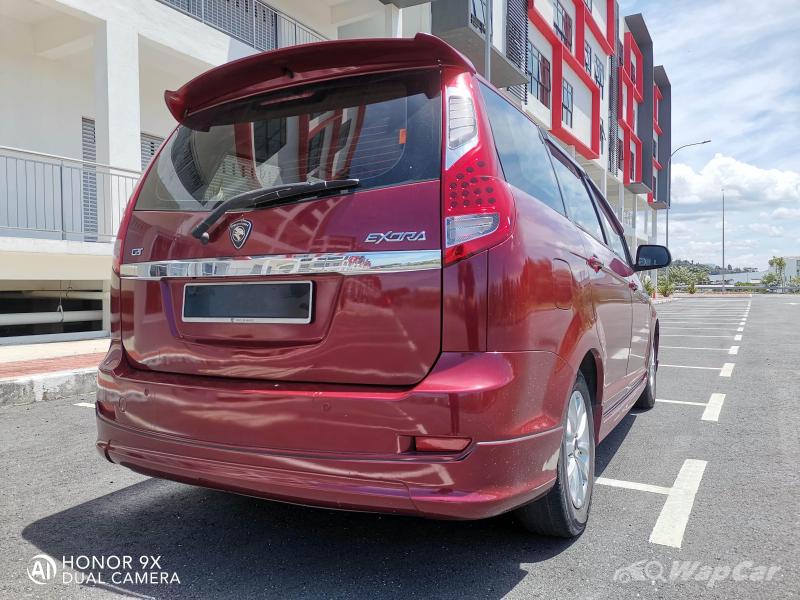 The car fully is furnished with leather, steering column control buttons and an overhead player. The 4 speed as I researched later was from an older Pajero, so it is robust and pretty much runs on any liquid. But to have the same amount of response that I get from the showroom, you need to use some high quality 'synthetic' ATF like HiRev Multi Vehicle ATF and filled it to the exact measurement. Most service centres will overfill up to 4.5 liters of ATF fluid hence the slow clunky performance of the gearbox. 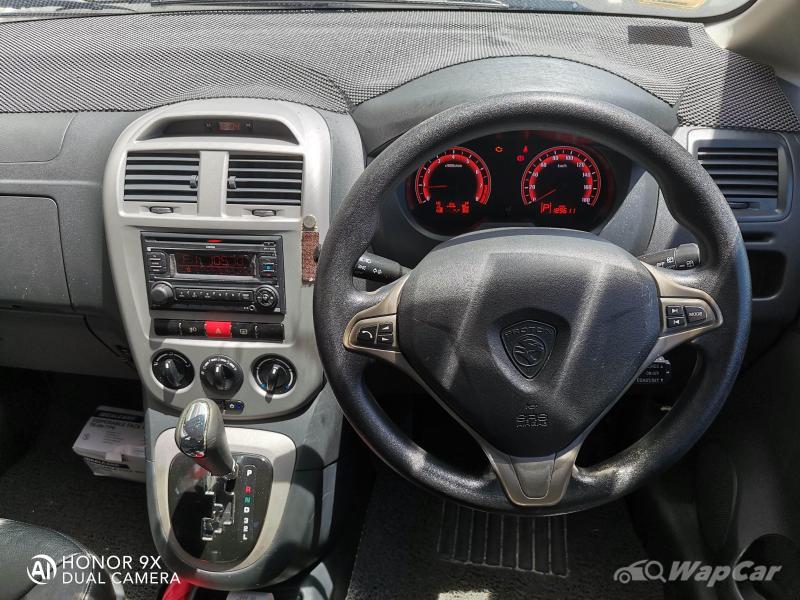 The engine, according to review by 'professional', was not powerful enough. That is not true. It has 150nm pulling a 1.45-tonne body but the power band comes at 4000rpm to 6000rpm so you got to floor it. I know, most people will tell you to go gentle on your car. Hey, if you can’t afford to use the full range of the engine rpm you definitely bought the wrong car.

This huge van will not win a race with a Myvi in a parking lot, but it will outrun a Vios uphill Karak highway (because Vios, 9 years ago, has lousy handling), doing 5000-6000rpm uphill, hitting 120+ in corners, with me grinning ear to ear flashing the cars in front to give way.

The superior handling means on the back road, every single vehicle on the road feels slower than you. You tend to try to overtake, or just gets really impatient with any car that brakes into a corner. But overtaking at 140kmph downhill in an MPV meant to carry 7, is probably pushing it. I have to train myself to drive slower, instead of just flooring the accelerator in corners.

I also learned the tyres are set up 'kangkang' , so the inner will wear out first, but usually the right side first. You have to switch the rubber itself left and right somewhere in the middle of the tyre's life. Now I have 3 different tyre brands on the same car after the first one went flat!

FC consumption...err...well...will not get better than 11km per liter, no matter how I drive. Comparatively, the mighty Innova does about 8km, so it's pretty good for a van that weighs 1.5 tonnes.

Overall, compared to my older Iswara LMSS, this car was miles better. It brakes harder, turns sharper, accelerates faster and can carry so many things. 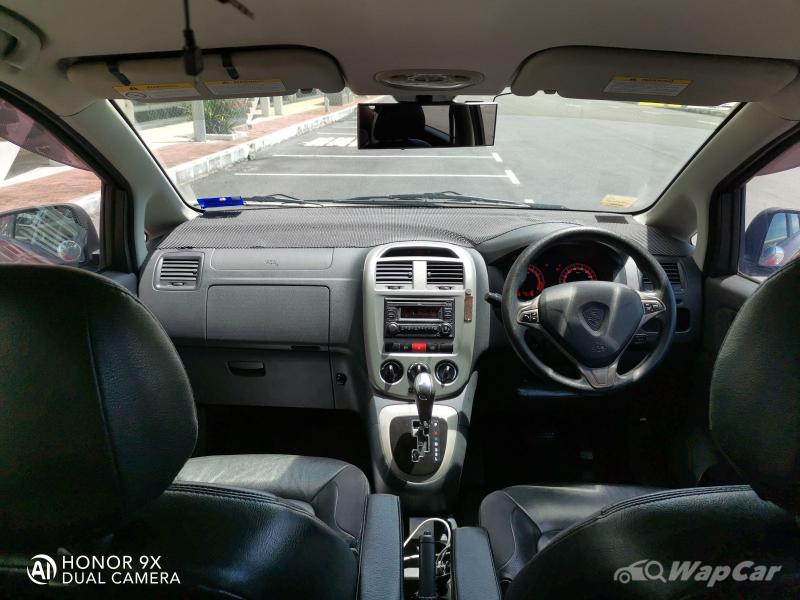 The interior is pretty simple, but the seats are better than Alza's. 2 adults can sit comfortably at the back. Most of the time the rearmost seats are folded. I can then just dump groceries or any large cargo without a single care. I remembered once in the park, I saw a not so old couple with 2 kids driving a Nissan Almera. The wife was nagging in Cantonese but was eyeing my Exora while the husband struggled to fit 2 kid bikes into the boot. With an Exora, you do not try to fit stuff into the boot. Just fold the rear seats and then just put your stuff there; bicycle, mattress or whatnot. 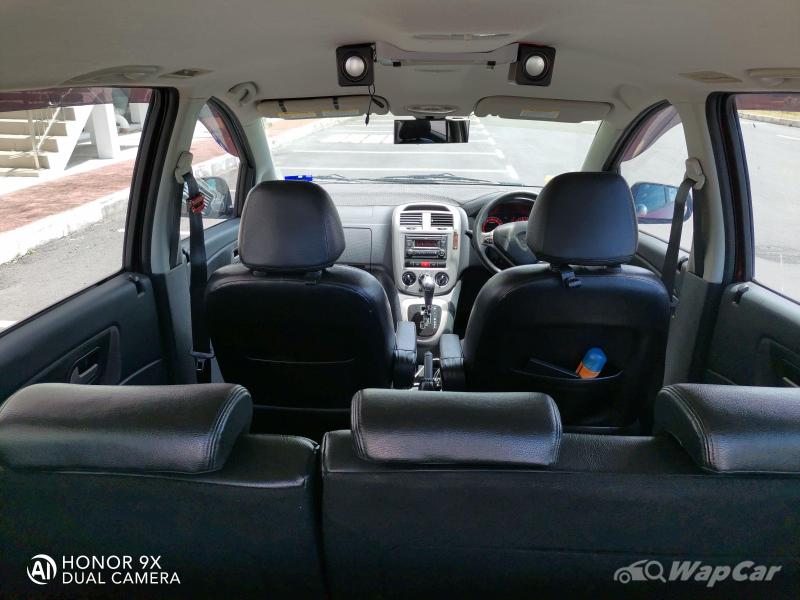 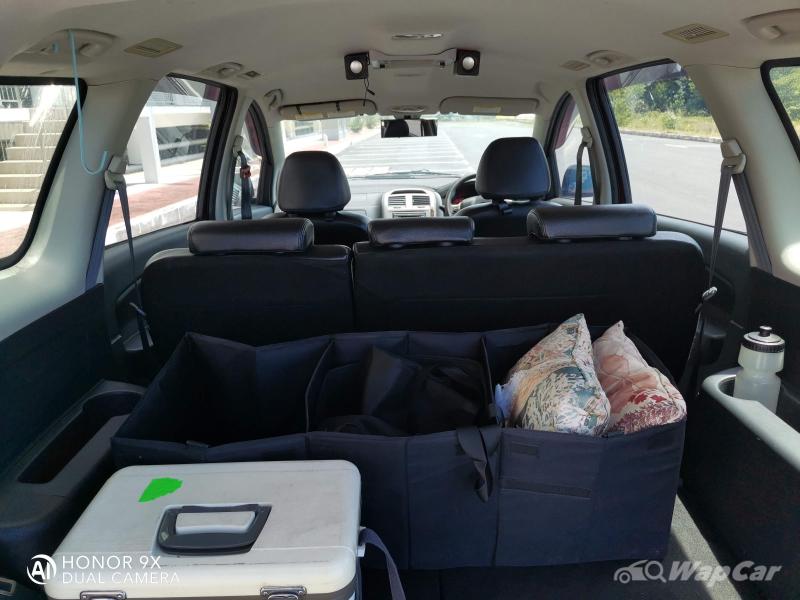 The leather is not hot even after parking for hours under the sun. After 9 years of pampering with leather product, it does not show signs of crack. The floor carpet is waterproof. The leather seat is also somewhat waterproof too. Yes, I've clean spilled milk and milo many times with a 3 in 1 vacuum. The car comes complete with tint, and having two blowers and cooling coil means the rearmost passenger still gets shivering cold. It was only later I found out the Innova had only front cooling coil (thank god I didn’t buy it).

The overhead players, only plays licensed DVD. The picture was so bad and the RF sound connection is lousy, but it's good enough to keep kids quite and occupied for a 3 4 hours long journey. You can carry all 7 people with enough space for luggage at the back. That is something the smaller Alza won't be able to do. With 7 adult onboard, the van is actually a wee bit smoother over bumps yet still retain the go kart like handling and braking.

Apart from the tyres wearing out on the inside, Proton cars have the usual creaking and squeaking noises. These came from the leather rubbing each other and later on dashboards and glovebox. And at times, the belt tensioner itself. The belt tensioner was the first thing I claimed for warranty. Yes, it's a nuisance, and no, it does not cause breakdown. As a matter of fact, the only breakdown I had so far was due to tire puncture and flat batteries.

Another cropping issue was the engine check light, caused by the VIM module sensor. The VIM is working, but Proton SC was never able to sort it out, even after replacing the entire module.

180,000km++ onwards, the light occasionally still turns on and I still casually floor it to 6000rpm.

The final issue that bugged all owners was the tendency for the windshield to develop crack on the driver side. The windshield cost somewhere in the range of RM400 and a high quality infra red filtering tint around rm300. This car needs good quality front tint else it will be too glaring and hot to drive.

Is power window an issue? No. It still works fine and will turn your finger black blue if you get it stuck. Wiper motor seems to be an issue for certain for certain batch but mines still working albeit slower than usual. The radio still works great but the antenna seems to rust itself out. Third brake light still working, LED brake light may have some LED not lighting up anymore and finally the tailgate gas lifter is almost out of gas.

This is probably the best part of this car. As most foreman tells me, the Campro CPS engine is really easy to service. The engine bay is huge, the engine is small, the wrench can pretty much go anywhere. I did get a cat stuck once in the car (it died). The engine runs on any oil, from full synthetic 5w30 Castrol magnetac to a 15w40 Penzoil Long Life Gold meant for a diesel engine. Spare parts are easy to come by and nowadays I sent it to a nearby shop barely 5-minute walking distance from the house. Usually, I spend no more than a total 15 of minutes in the shop for full servicing including tire change if any. If I took the Chery Eastar, the nearest service center with spareparts is some 20 minutes drive away.

The point is, the repair for this car is quite cheap and can be done without the need for a specialised shop, provided you are ok with not using 'original' parts. And Campro CPS is also the same engine used for most of the earlier proton taxis, so spare parts are plentiful.

I feel blessed to be able to afford to change all the wear and tear component according to the car servicing manual interval. That alone makes for a fast , efficient engine and reliable vehicle. It’s always better to get a car that you can keep at 95% new instead of driving slowly like it’s new 95% of the time.

I've completed the hire purchase loan for this car 2 years ago. It has been running great. The air-cond has had been overhauled. The fog light has been replaced. I change my belt and gasket well below the recommended mileage. I throw away tires as soon as the thread nears the marker.

The headlight is the one thing that is really obsolete. Even upgrading to a mini projector bulb, it was nowhere near as bright as a new car. The new car smell is long gone and instead, you get a wet carpet smell. Maybe it needs a thorough interior cleaning.

Since the past one year, the handling has started to deteriorate and the engine vibrates more than usual at idle. No more go-cart like precision on the road and it takes more effort to keep it straight. The car will need some pampering to make it feel like new again. I calculated the cost of replacing wheel ,steering and engine mount to be in the range of RM1500. After that, maybe a new coat of paint or vinyl. And pretty soon, the exhaust may start to develop a leak.

But it will be a worthwhile repair. I’m not interested to get into another loan for a new car. Besides, there’s no other car this big at this price range other than Exora.If it ever come to a point where the engine cracked into two, I will strongly consider putting something even more powerful! 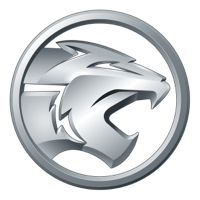